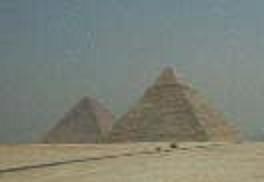 Chess seems to be on the upward march in Egypt, there are several strong young players coming through, and the Minister of Sport even thought it important enough to come to the excellent prize-giving (where the trophy for first place was even presented by Cleopatra herself!)

I had a thoroughly enjoyable stay (despite only arriving in time for the 3rd round - thanks to Alitalia going on strike!), Cairo has to be about the safest capital city in the World for tourists, and everyone was very friendly.

The tournament was very well organised, and there were good conditions for all the titled players.

This month was fabulously rich in terms of Flank Opening games, and it was incredibly difficult to decide which games to annotate, and which to leave out. Despite that I still found room for three of mine (including one that resides just outside my area!) I offer no excuse for this, it is just that I can never get enough of my victories!

, an invention of Bellon's, is rarely seen these days. In fact, it doesn't have a very good reputation at all, and so when I was preparing for my Egyptian opponent I couldn't resist giving him a chance to play it. See Kosten,A - Salem,Z for the outcome.

[A26]: The following position, from a typical Closed English, seems fairly innocuous for White, but in fact he is on the brink of disaster!

Have a look at Cebalo,M - Tkachiev,V if you don't know why, and make a point of never letting it happen to you!

[A34]: Sometimes, when playing through a game, you wonder just where one of the players went wrong. In Malakhov,V - Nisipeanu,L Black played lots of sensible moves, but just didn't seem to be able to avoid defeat!

This game is doubly interesting as at one point the position greatly resembles my brilliancy prize winning game from last year, and Black could also have offered his queen here!

[A36]: Kosten,A - Kengis,E has to be the shortest game I have ever annotated for ChessPublishing.com!

And yet, it forced me to re-examine my opinion of the Pure Symmetrical line with 5 e3, although I still think it is drawish! 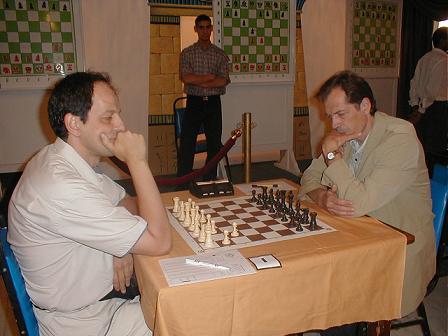 Just to prove that I really did play 1 g3!

[A13]: In Lunev,A - Korchnoi,V Korchnoi handles the English as if it were a Catalan, and achieves complete success.

[A14]: The opening of the game Zvjaginsev,V - Skatchkov,P is interesting, as in the diagram position:

which is a fairly typical Réti position, instead of the 'automatic' 8 e3, to control d4, White plays 8 Nc3!? which positively entices Black to gain space 'á tempo' with 8...d4, but Black resists the temptation, as it is not good.

[A07]: Strictly speaking, this is classified under the Réti, but is of particular interest to players who like to open 1 g3, and want to play a Pirc/Modern set-up with White and Black.

In Fridman,D - Godena,M the Italian GM plays a strong move in the opening and completely crushes his highly-rated opponent.

[A40]: Hang about, I hear you say, this is not in the Flank Openings section! True, but I have had two recent games where people played to avoid the Maroczy against me (which is, of course, important to Flank Opening players), and I could find neither elsewhere on the site.

In the above (Benko-style) position I pressed home my attack with a move Mr Mo would no doubt have enjoyed. And a few moves after that I played a sacrifice so strong, that the lights went out!

Please feel free to share any of your thoughts with me, whatever they are, suggestions, criticisms (just the polite ones, please), etc. Drop me a line at the Flank Openings Forum, or directly to tonykosten@chesspublishing.com

Till next month, Tony K